Bile acids are a group of amphipathic steroids synthesized by hepatocytes from cholesterol and excreted into bile. They function to emulsify fat in intestine and facilitate nutrient absorption and are highly conserved via enterohepatic circulation as outlined below. This emulsification is possible because of their amphipathic nature and tendency to form micelles. 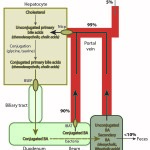 To produce bile acids, cholesterol is first degraded to a “primary” bile acid (mostly cholic acid or chenodeoxycholic acid) via hydroxylase enzymes. The primary bile acids are then conjugated to glycine, taurine (particularly in cats), glucuronic acid and sulfates within the hepatocyte and excreted into bile canaliculi via the bile salt export pump (BSEP) and multidrug resistance-associated protein-2 (also transports conjugated bilirubin). The excretion of bile acids into the biliary canaliculi sets up an osmotic gradient, which draws water into bile and drives bile salt-dependent bile flow. Once in the intestine, conjugated bile acids are reabsorbed by active transport receptor-mediated mechanisms in the ileum, which is greater than 90% efficient. The receptor is called the intestinal bile acid transporter (IBAT) and is structurally related to the uptake transporter on the canalicular surface of the hepatocyte (Ntcp) that extracts bile acids from blood (and is also sodium-dependent). In dogs, the IBAT protein is primarily expressed in the ileum, cecum and colon. The receptor is downregulated in dogs with chronic intestinal inflammation, leading to increased loss of primary bile acids in feces (Giaretta et al 2018). Bile acids that are not absorbed (10% or less) can be deconjugated by intestinal bacteria (particularly if they pass into the colon, but also in the ileum) and are then passively absorbed in the colon. Colonic absorption of these unconjugated bile acids will be increased in malabsorption due to ileal disease or resection when more bile acids are presented to the colon. Bile acids can also be dehydroxylated by enteric bacteria to produce “secondary” bile acids (deoxycholic acid and lithocholic acid), which are also absorbed in the colon or excreted in the feces. After absorption, the unconjugated and conjugated bile acids enter the portal blood, where >95% are extracted by the hepatocyte via a sodium-dependent taurocholate cotransporter (Ntcp – this takes up conjugated and some unconjugated bile acids) and the family of organic anion transporting polypeptides (OATP – this take up unconjugated bile acids, and likely unconjugated and conjugated bilirubin). Thus, very small amounts of bile acids (generally <15 μmol/L) are seen in fasting blood samples of dogs and cats due to the efficiency of ileal resorption and hepatic extraction of the recycled bile acids. Naturally, gall bladder contraction in these species will result in an extra load of bile acids being excreted into the intestine and reabsorbed, so higher concentrations are expected after gall bladder contraction (which we mimic in the clinic by providing food and then measuring a post-prandial bile acid concentration – the goal of which is to “challenge” the liver to see if it can handle this extra load). Note that both the excretion of bile acids into the canaliculi and extraction of bile acids from the portal blood involve energy-dependent pumps which can be disrupted in a variety of conditions including cholestasis from obstruction or inflammation (cytokine-mediated).

There are some confusing terms associated with bile acids (which we have used here as a generic term).

The following method is used by Cornell University to measure bile acids.

In the first reaction of this two-step process, 3α-hydroxysteroid dehydrogenase (3α-HSD) catalyzes the oxidation of the bile acids to 3 oxo-bile acids. This reaction occurs concurrently with the reduction of NAD to NADH. The NADH is oxidized back to NAD, whilst diaphorase reduces nitro blue tetrazolium salt (NBT) to formazan. The formazan is measured photometrically and is directly proportional to the bile acid concentration.

The reactions are shown below:

At Cornell University, the results are reported in μmol/L (SI units).

The conversion from conventional (mg/mL) to SI (mmol/L) units is as follows:

In dogs and cats, both random (not related to eating or fasting), fasting (preferably overnight or collected just before the routine meal) or post-prandial (2 hours after eating a standard meal) bile acid concentrations can be measured, although a bile acid panel, consisting of fasting and post-prandial samples is preferred due to its increased sensitivity to hepatic dysfunction. This is done because it is a “challenge” test – gall bladder contraction initiated by feeding creates a bolus of bile acids for the liver to extract after intestinal absorption. This is not done in grazing animals (also horses lack a gall bladder). Both blood samples should be collected into red-top vacutainers (serum is preferred for bile acid measurement) and serum should be separated promptly from cells.

If not processed on the same day, refrigeration at 2 – 8°C or freezing at -20°C is required.

Bile acid measurement provides useful information about the portal venous circulation and hepatic function. They are produced in the liver from cholesterol and are stored in the gall bladder. Gall bladder contraction with feeding releases bile acids into the intestine. Bile acids undergo enterohepatic circulation, i.e. they are absorbed in the intestine and taken up by hepatocytes for re-excretion into bile. Measurement of bile acid concentrations is, therefore, a good indicator of hepatobiliary function, but is not specific for the type of underlying liver disease and diseases that secondarily affect the liver (e.g. metabolic diseases like hyperadrenocorticism) can also increase bile acid concentrations. They are also used as a marker of abnormal portal blood flow.

Bile acid concentrations will be increased under the following situations:

Note, that high bile acid concentrations are not specific for underlying liver dysfunction or abnormal portal blood flow. Increases can be seen in animals without clinical or other laboratory evidence of liver disease (e.g. dental disease in dogs).

Several variables can affect the interpretation of bile acid testing: