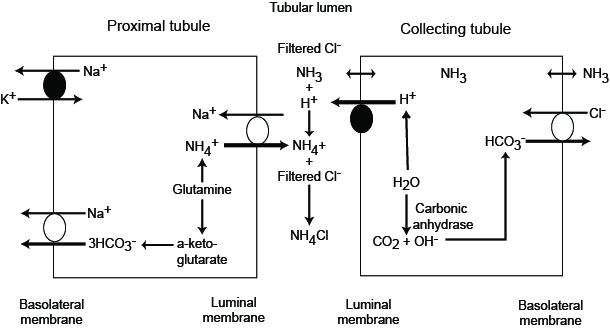 The kidney is capable of excreting acid (as ammonium chloride) and generating new bicarbonate (not just reclaiming filtered bicarbonate), when it produces ammonium from glutamine (an amino acid which is mostly absorbed from blood, with about 20% being absorbed directly from the urine filtrate). This is the way the kidney can generate bicarbonate and excrete hydrogen in acidotic states and how it can decrease acid excretion (and promote bicarbonate loss) in respiratory alkalosis. In the proximal tubules, ammonia generation is linked to sodium absorption whereas in the distal tubules it is linked to hydrogen excretion (with chloride).

1) In the proximal tubule, ammonium (NH4+) is generated from glutamine. Glutamine is first converted to glutamate by glutaminase. Then a glutamate dehydrogenase converts glutamate to α-ketoglutarate and two ammonium ions. The α-ketoglutarate can be oxidized or converted to glucose (which is used for gluconeogenesis), both processes release bicarbonate. The ammonium is transported into the renal lumen in exchange for sodium by a luminal exchanger. The ammonium is then “lost” or excreted into the urine with filtered chloride as its anion. The bicarbonate is returned to the blood via the basolateral sodium/bicarbonate cotransporter, which derives its energy from a basolateral sodium/potassium exchanger or pump. This process thus generates new bicarbonate, while excreting an acid (ammonium chloride). Hypokalemia and acidemia stimulates ammoniagenesis, promoting hydrogen excretion and bicarbonate retention. Angiotensin II stimulates the basolateral sodium/bicarbonate cotransporter, facilitating absorption of the generated bicarbonate. Note, than an alternative use for the generated ammonium in the renal tubules is its conversion to urea in the urea cycle in the liver (if this occurs, the ammonium is not excreted into the urine and bicarbonate is not generated).
2) In the collecting tubule, ammonia (NH3) diffuses freely across the renal tubular cell and combines with hydrogen excreted by the H+ATPase. The hydrogen is generated from carbon dioxide and water by carbonic anhydrase. The bicarbonate leaves the cell in exchange for chloride by the basolateral chloride/bicarbonate exchanger (the energy for which is derived from the sodium/potassium pump on the basolateral side, not shown). The hydrogen ATPase pump on the luminal surface and the basolateral chloride/bicarbonate exchanger are stimulated by aldosterone.

In both tubules, excretion of hydrogen is linked to generation of new bicarbonate.