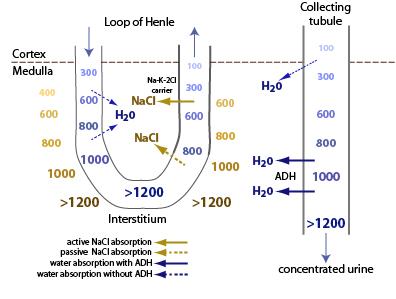 Transport of NaCl (without water) in the thin and thick ascending limb of the loop of Henle results in an interstitial osmolal gradient from 285 mosmol/kg (in the cortex, similar to plasma) to >1200 mosmol/kg in the medulla at the tip of the renal papilla. NaCl transport is passive in the thin part of the ascending limb whereas it is active via the Na-K-2Cl carrier in the thick ascending limb. The creation of a hypertonic medulla is facilitated by the renal tubules and vasa recta (blood vessels surrounding the tubules in the renal medulla) as follows:
1) Active absorption of urea from the collecting tubule under the influence of ADH (not shown).
2) Passive absorption of water without NaCl in the descending limb of the loop of Henle, which helps to concentrate NaCl in the tubular lumen as it enters the ascending limb. In the vasa recta surrounding the descending limb of the loop of Henle, NaCl is absorbed into plasma, whereas water leaves the plasma and enters the interstitium in response to the high interstitial sodium chloride and urea concentrations created by the renal tubules (see below).
3) In the vasa recta surrounding the ascending limb, the reverse occurs because the plasma is now hypertonic to the medullary interstitium. This results in absorption of water into the blood and return of the absorbed solute to the interstitium. This is referred to as the countercurrent exchange mechanism.

In the presence of ADH (secreted in response to hypovolemia and hyperosmolality in peripheral blood), water is absorbed (without NaCl) in the collecting tubule into the medulla. The amount of water absorbed is dependent on the interstitial osmolal gradient established by the loop of Henle. Thus, urine becomes concentrated as it equilibrates with the interstitium in the medullary collecting tubule.