Iron concentrations are measured as a way to assess iron stores in the body. However serum or plasma iron is not a good marker of body iron stores. This is because iron concentrations in blood change rapidly because iron is turned over constantly (frequently enters and exits cells) during normal metabolism and is strongly influenced by inflammatory cytokines and a protein called hepcidin. Rather, the best test (“gold standard”) for body iron stores is measurement of hepatic iron (which is rarely done in living animals as it is a quite invasive procedure to get a 1 g liver biopsy to measure hepatic iron). Subjective evaluation of bone marrow iron (with a Prussian blue stain, which detects hemosiderin within macrophages) can be used as a surrogate for liver iron, however this is also infrequently done for the diagnosis of iron deficiency anemia.

Measurement of serum iron concentrations is usually performed to help confirm a diagnosis of iron deficiency anemia. It is rarely used for diagnosis of iron excess (a very infrequent disorder in animals). At Cornell University, we include iron panels (iron, TIBC, % saturation) on our routine mammalian chemistry panels, because the results can provide useful adjunctive information in animals with or without anemia or iron deficiency. In other words, the results of an iron panel should never be interpreted alone, but always in the context of hemogram and other biochemical results and the patient’s clinical signs and known disease processes. For example, a low serum iron and % saturation in an animal with a microcytic hypochromic anemia supports an iron deficiency anemia, whereas a low iron and % saturation in an animal with a normocytic normochromic anemia (or without anemia) is likely due to causes other than iron deficiency, such as inflammation.

Note, that serum or plasma tests for iron are not measuring “free” iron (which is a strong free radical and would cause major tissue damage if truly “free”) or iron within hemoglobin in red blood cells. Rather it is measuring the iron that is bound to apotransferrin, the iron transport protein in blood. In fact, we measure serum or plasma iron by liberating it from transferrin, using low pH conditions (just as iron would be removed from transferrin within the phagolysosome of cells) (see below).

Iron is taken up from dietary sources. If more iron is taken up then is lost from the intestine in normal daily use or used for hemoglobin synthesis or other cellular activities, the excess iron is stored within cells, specifically macrophages (most of their iron comes from red blood cell turnover) or hepatocytes. Iron within these cells can be released for use when needed, so these locations serve as body stores of iron. Iron stores do build up in our body and we need these stores to provide iron in states of nutritional iron deficiency or excess iron loss (usually from loss of blood, since RBC contain most of the iron within the body). Young animals have low stores of iron, because they need iron for growth and milk is low in iron, but iron stores build up quite quickly.

Once ingested from the intestine, iron is moved around the body bound to apotransferrin in plasma. Cells have receptors for transferrin and, when they need iron, transferrin receptors are unregulated on their surfaces and binds transferrin (apotransferrin + iron). The transferrin receptor-transferrin complex is internalized by clathrin-mediated endocytosis and, within the acidic pH of the phagolysosome, iron is liberated off transferrin. The transferrin receptor-apotransferrin is then recycled back to the surface; the apotransferrin is then freed and can go and pick up more iron from macrophages, hepatocytes or intestinal epithelial cells. Naturally, erythroid progenitors in the bone marrow have the most need for iron (for hemoglobin synthesis) and have the highest concentrations of transferrin receptor (this is lost as immature RBC lose protein synthetic capability as they mature).  Iron is also recycled in the body. When RBC naturally age and reach the end of their normal lifespan, they are phagocytized and degraded by macrophages. The iron within their hemoglobin is released into the macrophage, which can store the iron (if iron is not needed), release the iron for use by erythroid progenitors (which cluster around macrophages in bone marrow, waiting for their iron) or release iron to transferrin for transport to other cells in the body. For a graphic illustration of this, please refer to the iron physiology page.

Changes in iron with inflammation

Thus, factors which affect iron concentrations are absorption, release and uptake by cells, red blood cell turnover, use (conversion to hemoglobin within erythroid progenitors) and loss. Iron stores are regulated principally by uptake from the intestine. There is no regulation of iron loss (sloughing, blood loss).

End point, blanked (an initial optical density measurement is taken before addition of reagent. This decreases the effect of interferences such as lipemia, hemolysis and icterus, which may falsely increase results without a sample blank) 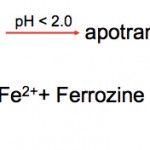 Serum or heparinized plasma iron represents the iron bound to apotransferrin. Binding is tight at physiological pH so the assay takes advantage of acidification (which normally liberates iron from transferrin inside cells within the acidic phagolysosome of macrophages) by citric acid and thiorurea to release the ferric iron from transferrin. Once released, the ferric iron is converted to ferrous iron by ascorbic acid (included in the reaction) and a color change is produced from the ferrous iron reacting with a specific substrate, with concentrations being expressed in µg/dL.

Iron is measured in μg/dL (conventional units) or μmol/L (SI units). The conversion formula is shown below:

Heparin is acceptable. Anticoagulants with chelating agents such as EDTA, oxalate, and fluoride should not be used (will result in falsely low concentrations).

Stable if separated from cells.

The most common causes of low iron are transient variation and sequestration secondary to inflammatory cytokines (which inhibit iron absorption and prevent iron release from macrophages through upregulating hepcidin). Compared to these two causes, true iron deficiency (from decreased intake/absorption or external blood loss) is a less common cause of low serum or plasma iron concentrations.

The most common causes of increased iron in serum or plasma are transient or random variation, acute hepatocellular necrosis, corticosteroid therapy (dogs, horses) and increased iron turnover. Iron excess (overload) syndromes are rare in animals. There is some confusion with the terms related to syndromes of iron overload. Hemochromatosis is a term that should be restricted to inherited or primary causes of iron overload, e.g. defects in transporters of iron in the intestine resulting in increased iron uptake. The excess iron is found within macrophages and cells.  The iron accumulation is pathologic and frequently results in hepatic cirrhosis or liver failure. Hemosiderosis, in contrast, is a secondary condition due to iron overload from parenteral administration of excess iron, blood transfusions etc. With this condition, iron accumulates in macrophages, not tissue cells.  This is reversible and usually not pathologic.